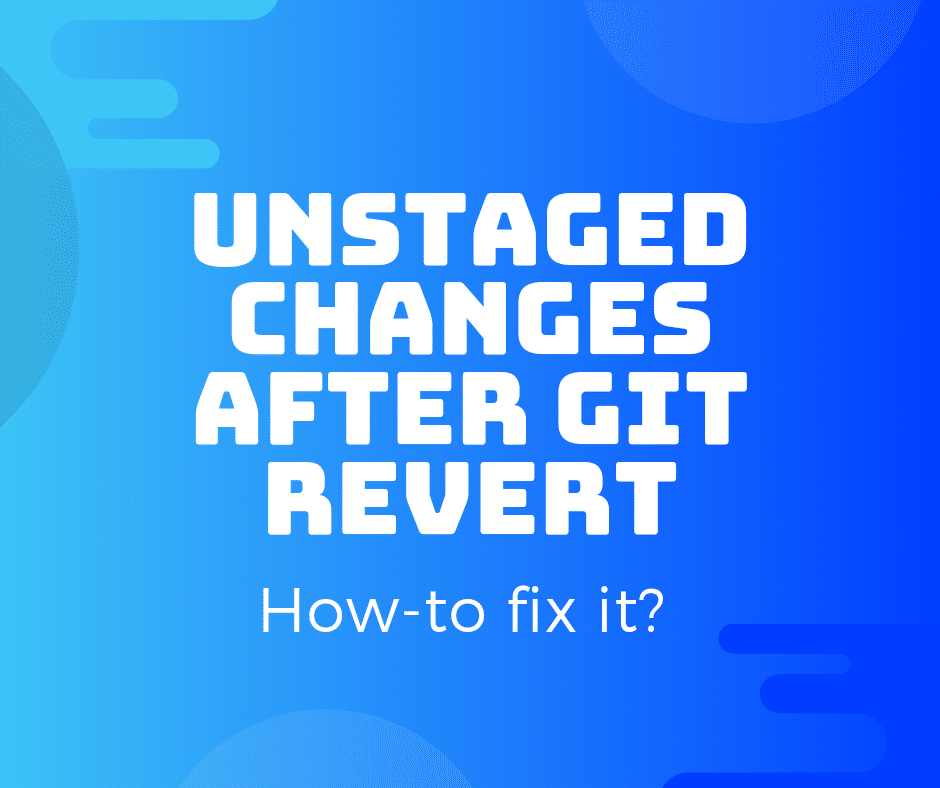 The problem: unexpected unstaged changes after a revert

Recently, when using the GIT command-line to switch to an existing user branch, the checkout failed due to some local changes in the current workspace. In this case, git suggests to commit or to stash the local changes.
Since I was not interested in the local changes, I decided to revert these files to the last commit (HEAD). The revert process succeeded 😊.

Surprisingly, when trying to checkout the new user branch, the same files were shown as unstaged.

Initially, I tried reverting again the changes to the last commit. Instead of git revert, I used the following command:

Unfortunately, it did not work. 🙁

Indeed, when running the command:

the same files were shown again as unstaged.

I immediately realized that Git was not reverting the CRLF/LF characters at the end of the lines of the relevant files. These characters were ignored during the revert process.

This was pretty evident because when running the git command:

In order to solve this issue, I found a workaround solution:

When switching branches using the “–force” option, then the checkout proceeds even if the index or the working tree differs from HEAD. In this way, all local changes are thrown away.

Nevertheless, it is clear that this issue depends on some settings of the .gitattributes file.

The .gitattributes file allows you to specify the files and paths attributes that should be used by git when performing any git action. In this file, the user can his own configuration. For example, we can specify which characters should be used at the end of the lines, i.e., CRLF or LF.

Therefore, in order to solve this issue, an easy fix is provided by the following sequence of operations:

After getting the correct version of the .gitattributes file, it is possible to execute all those git commands that require no local changes (e.g., a git checkout or pull operation).

About the post's author

C++ Software Engineer, Ph.D. working in Malta on embedded systems with a vision in mind: design best software to solve complex problems in the real world.

To build a community of (future) C++ and algorithms experts, helping software developers to pave the way for the job of their dreams.

Do you need help?

I'll assume you're OK to store some cookies. If you wish, you can opt-out at any time.

We store cookies - only with your consent - to improve your experience while navigating through the website. You can opt-out at any time.

For more details, please check our Privacy & Cookies Policy.
Necessary Always Enabled
Necessary cookies are absolutely essential for the website to function properly. This category only includes cookies that ensures basic functionalities and security features of the website. These cookies do not store any personal information.
Functional
Functional cookies help to perform certain functionalities like sharing the content of the website on social media platforms, collect feedbacks, and other third-party features.
Performance
Performance cookies are used to understand and analyze the key performance indexes of the website which helps in delivering a better user experience for the visitors.
Analytics
Analytical cookies are used to understand how visitors interact with the website. These cookies help provide information on metrics the number of visitors, bounce rate, traffic source, etc.
Advertisement
Advertisement cookies are used to provide visitors with relevant ads and marketing campaigns. These cookies track visitors across websites and collect information to provide customized ads.
Others
Other uncategorized cookies are those that are being analyzed and have not been classified into a category as yet.
SAVE & ACCEPT
Powered by